Erik posted the link to the flush article on the the BLOG.   Check it out!

As of 11:53am on 3/15/2012 Grey Reef is MUDDY.  Around 11am yesterday Eagle Creek decided to run red again and blow the river out!  Conditions today on Grey Reef are poor.  A little surprised to see boats putting in???  Sent our boys up to Fremont and the Mile.  As for the fishing before the blow out…Seth said it was silly.  Lots of fish all day and his angler Bill caught several pigs over the 21″ mark.  Top fly patterns continue to be a hot head mohair leech, mini impaler, IED, and UV leech.  Will post another report tomorrow in regards to the Miracle Mile and Fremont Canyon.

Well, I think it’s safe to say that this was the breakout weekend for the 2012 season.  With water conditions at Grey Reef being slightly questionable we held off on our guide boats until yesterday.  Visibility on the upper river (Grey Reef-Lusby) was around 1.5-2ft.  Plenty good for fishing!   Hot-head pine squirrel leeches, hot-head mohairs, reef worms, IEDs, mini impalers, PALs and a tailwater tiny were THE bugs.

Rick and Seth used one of our private boat ramps with Meyers gang and had an awesome day!  Gary Meyers, a Casper native said it was the most doubles he had ever had!

For all those wadefishing junkies out there we had several PRIMER trips and all reports came back great.  Same bugs, on a 6-8ft nymph rig with anything from a single BB to two ABs.  A lot of fish still hanging in the lower parts of the runs.  As always we are still picking up a few on streamers and our guide boats yesterday did well on a goldie…surprise, surprise.  We did try some other patterns but the goldie out produced everything else.

Have some great weather the next four days!  Have guide boats out everyday this week, so we will keep you posted.  Thanks to all those that stopped in the shop this weekend.  It was our best weekend of the 2012 season!

Fremont is in good shape as is the Miracle Mile.  Road conditions to the Mile…muddy.

Just went down to Grey Reef Dam to talk to Brad, who is the king of Grey Reef wadefishing.  He was hooked up when I got there and hooked up as I was leaving.  According to him the fishing at the Dam is insane right now!  Pine squirrel leech, hot-head leech, san juan(purple) and an amber scud.  As far as the water conditions are concerned…anything downstream of Lusby is out of the question, MUDDY.  We are starting to see some minor runoff but it’s hard to say what’s going to happen.  It’s more than likely going to get worse by the end of the day but the effect on the river is yet to be seen.  We still have plenty of low elevation snow but the worst could be over for now.  We will post another updated river conditions report this evening…stay tuned.

GREY REEF-muddy below Grey Reef Dam.  Our best guess is it probably isn’t going to clear by tomorrow.  With the warmer temperatures it might get worse but we are not going to make that call until it happens.  We will update Grey Reef river conditions tomorrow morning.

MIRACLE MILE-mostly clear but the road is muddy and icy in spots.

Glad our guides and anglers got a least one day in on the lower river.  Jim Peterson and Seth managed some really nice rainbows floating below Government Bridge.  From the sounds of it the fishing was on fire until the river blew out around 3:00…after that they came up to do the upper river to finish out their day. Stu fished Fremont and from the sounds of it, the catching was non stop…reef worm, PAL, mini impaler, pulsating emerger.  They boys headed up to the Mile today and caught a pile of big fish on otter egg’s and a small purple san juan.

Current conditions on Grey Reef are less than perfect.  Eagle and Blue Creek are dumping mud into Grey Reef Reservoir at a very rapid rate and from what we are seeing Grey Reef may be BLOWN OUT tommorrow!  Attached is a picture taken at the fly shop at 3:00pm.

Not much has changed on the North Platte.  Had some nice weather yesterday and the fishing was good from the reports we gathered.  Brad hit up Cardwell for a few hours in the afternoon and did REALLY well nymphing LAZYs, PALs and a foam wing RS2.  I went out for about an hour and swung a Morrish medusa on the Scott 1156/7 switch rod…had six or so fish eat the big bug.  Pretty windy and cold today but it looks like we have a warmer weather pattern heading our way this weekend and early next week. 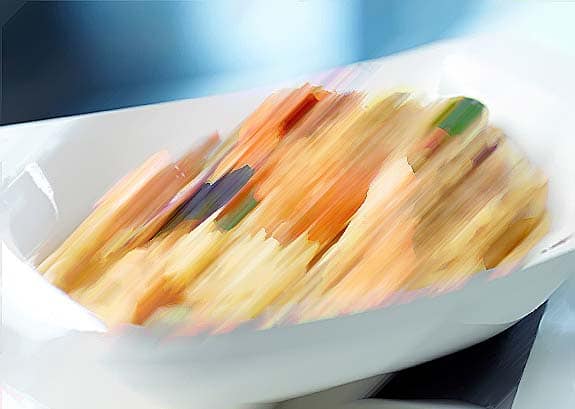 Wind was the enemy over the weekend!  Friday and Saturday had sustained winds around 30-40mph and gusts to 70mph.  We decided to cancel our day trips and move them to following weekend…wise thing to do.  Sunday shaped up nicely and yesterday was an absolute peach.

Grey Reef continues to nymph very well and we did manage a few fish on dries (midges) in the late morning-early afternoon.  We had two groups head to the Mile yesterday for a walk-wade adventure and it was good.  Nymphing, without question, was the ticket but a good number of nice fish were caught stripping/swinging a goldie and/or a home invader(black).  Other than the goldie the fish definitely seemed to be keyed in on anything black as far streamers go.

Road conditions to the Mile were mostly good with a few slick/drifted/muddy spots along the way.  This could be changing drastically, as we are currently getting pounded with wind and snow this morning.